The Fox Valley Marathon series was held Sunday September 20 in St. Charles, IL.  There are three race distances to choose from: half marathon, 20 miler, and the full 26.2.  Each race started at 7 am.

All three distances follow the same path for just over 7 miles before the 20 mile and marathon runners continue to head South.  The course runs through some the the neighborhoods in Geneva, IL with the rest of the race following the Fox River.

Packet pick-up was held in St. Charles.  I went after work on Friday and got in and out within 5 minutes.  They had a few tables set up for runners to browse and shop.  I skipped them in favor of beating traffic home on a Friday afternoon.

It was a beautiful course with lots of shade.  The running paths could be crowded at times (especially in the beginning) but as the racers split ways and people began to thin out, there was plenty of space to run comfortably without bumping elbows with others. 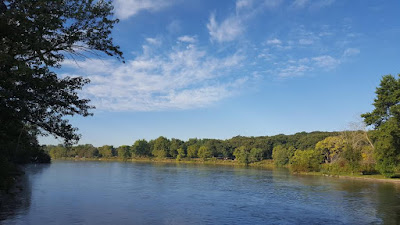 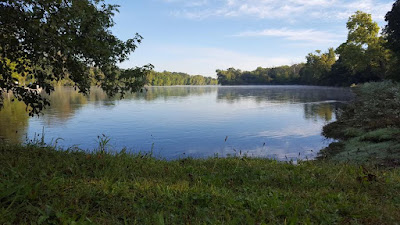 The race was very well organized with awesome volunteers!  There were excited volunteers encouraging racers every step of the way.  The volunteer at mile 12 was dancing.  That made my day.  There were loads of signs with arrows leading the way and I never felt confused.  There were also volunteers at every turn directing you by saying "turn left" or "be careful, it's slippery!"  I think the race was so well executed because of all the amazing people they had working it. 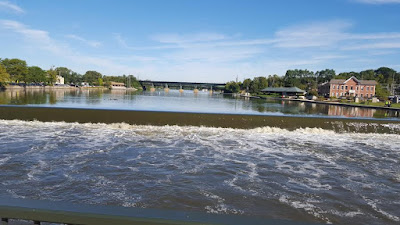 I started my day with oatmeal topped with almonds and blueberries and a couple cups of coffee. 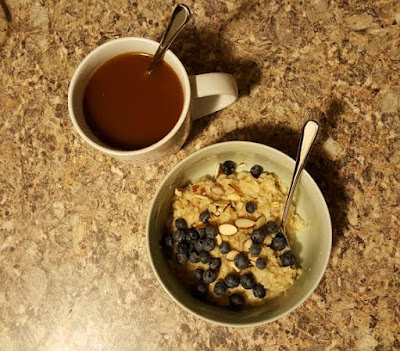 We arrived 30 minutes before race time and had some difficulty finding parking in downtown St. Charles.  Chris dropped me off at the start and parked the car with my mom.  I headed for my last bathroom break.  The line was long, but there were many port-a-potties so it went quickly.

I had a major slip-up before the race even began.  I left my timing chip on my kitchen counter.  I had realized it was missing less than 15 minutes to race time while in line for the port-a-potties.  Not the best time to not have an important piece of race equipment.  I immediately went over to the help desk and explained to the worker my problem.. He was quick to respond and gave me another bib while writing down my information to change it in the system.  It was a huge sigh of relief and I probably thanked him at least three times. 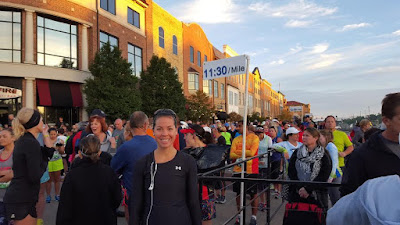 This was a race where I can say I felt good the entire time I was running.  I allowed myself the first 5 miles to warm up.  I focused on not getting caught up in the excitement of the start and going out too fast.  My first miles were relatively consistent with my goal pace to be around 8:00/mile.  By mile 6 I knew I was ready to crank up the speed.  The next 4 miles flew by and I was hitting my paces consistently. 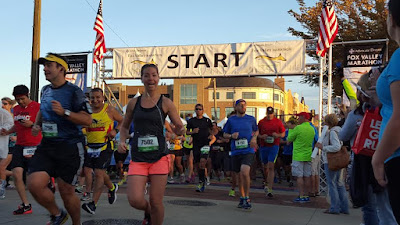 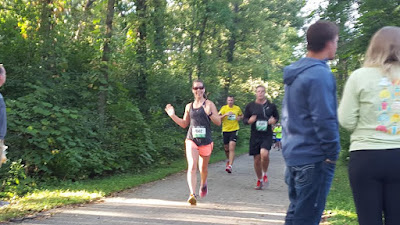 I saw Chris, my mom, and friends at Mile 10!  Miles 11 and 12 I started to feel the distance but I was able to run sub-7:45/mile.  I pushed the pace the last 1.1 miles finishing the race feeling really strong! 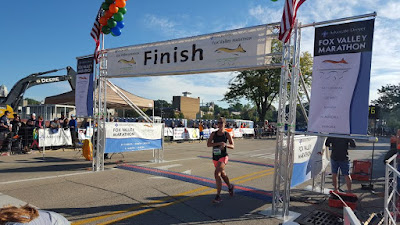 Crossing the finish line I was immediately stopped by a man who had passed me in the last mile and had finished just before me.  He thanked me for setting the pace and stated he had been chasing me since I had passed him earlier in the race.  What a confidence booster!

This race blew my last half marathon PR of 1:58:XX out of the water.  I have only recently within the past year started to tolerate and improve on my speed, so I am excited to see how much faster I can get. 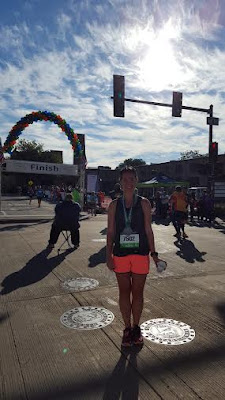 There was loads of food and drinks to pick up while walking through the finishing chute. 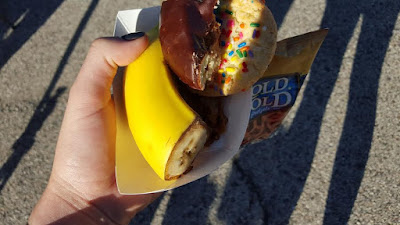 One of my very good friends, Alex, ran this race as his very first half marathon and killed it!  He broke 2 hours (which is extraordinary for a first timer) and is looking forward to his next race! 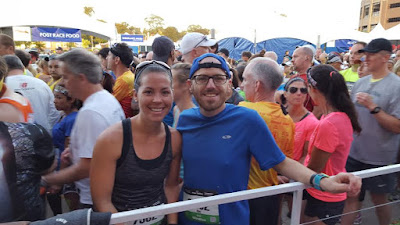 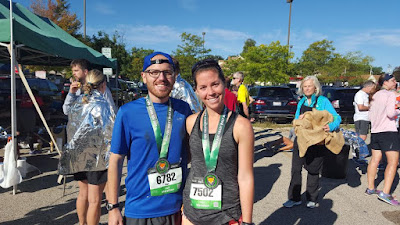 Overall I thought this race was very well organized, had a great course, and had awesome amenities for runners at the end of the race including food, drinks, massages, and physical therapists doing stretching. 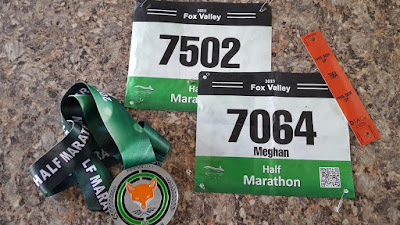 The Fox Valley Half Marathon will definitely be a race on my yearly list!
Posted by Meghan at 6:30 AM